Antique blue enamelled gold capelet and dizainier ring, decorated with a marine anchor, a flaming heart and a cross.

Antique religious ring in pink gold 18 karats. Ring with three symbols in its center, also called “the three virtues”. On the left, there is a navy anchor representing hope; in the center, a heart on fire symbolizing charity and finally on the right the cross representing faith. The three virtues are represented in gold on a blue enamel background. The ring is openwork with eleven raised dots. The latter allowed the wearer to scratch his tens serving as a rosary. Antique ring of the 19th century.

Condition : Old trace of enlargement, that’s why there are 11 points and not 10. Missing enamel ; wear.

Historical point: the capelet ring was worn by women, children and sailors. They can be made of gold, silver, brass and sometimes even enamelled. These rings were more worn in the 19th century in the former Nord-Pas-de-Calais region (Flanders, Artois), in the North of France.

**The antique box is not sold with the item** 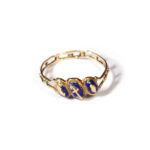 This website uses cookies to improve your experience while you navigate through the website. Out of these, the cookies that are categorized as necessary are stored on your browser as they are essential for the working of basic functionalities of the website. We also use third-party cookies that help us analyze and understand how you use this website. These cookies will be stored in your browser only with your consent. You also have the option to opt-out of these cookies. But opting out of some of these cookies may affect your browsing experience.
SAVE & ACCEPT
×
Leave us your email to order
Your email will be added automatically on the order page
Invalid email
X